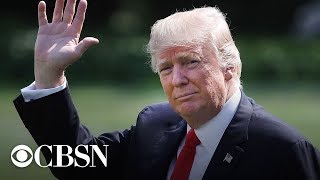 The Wall, Watergate, a Nixon Tat and Possible Trump Rat

We are living in a time that is even more serious than Watergate, that infamous political burglary about which President Richard M. Nixon lied and then was forced to resign under threat of impeachment. Now, a figure out of Nixon's past, one with a tattoo of the disgraced President on his back, has emerged as a key player in the drama that continues to unfold. Unlike Watergate, the Trump presidency in its virtual entirety has led our nation into a future of: International inse
21 views0 comments
Bob Gatty

On the 20th day of the government shutdown, eight national Native organizations are urging the President and Congress to immediately end the partial government shutdown, which they say breaks the treaty and trust obligations the federal government owes to tribal nations. The organizations jointly sent a letter to Congress and the President outlining the wide-ranging impacts of the shutdown on Indian Country. The contend that America’s longstanding, legally-mandated obligation
10 views0 comments
Bob Gatty

Feeling the Heat from Trump's Folly

Apparently realizing that delaying tax refunds will thoroughly tick off millions of Americans, including "his people," President Trump today ordered the Internal Revenue Service to pay those refunds -- despite his border wall government shutdown. The Washington Post reports that the decision "could prove extremely consequential" for taxpayers and the economy. Last year, The Post reported, between Jan. 29 and March 2, the IRS paid out more than $147 billion in tax refunds to 4
12 views0 comments
Bob Gatty

The Violence Against Women Act (VAWA), which provides funding for programs to help victims of sexual assault, domestic abuse and stalking, as of now is a victim of President Trump's demand for his wall. Passed in 1994, the law's programs are funded by the Justice Department, which is one of the many government agencies affected by the #TrumpShutdown. It had been passed after Anita Hill testified against Clarence Thomas during his Supreme Court confirmation hearings and expire
15 views0 comments
Bob Gatty

After watching President Trump's televised temper tantrum today at the White House with Democratic leaders Rep. Nancy Pelosi (CA) and Sen. Chuck Schumer (NY), you don't have to be a clinical psychologist to conclude that our country is currently being led by a crazy man. In the first place, it was lunacy to hold a top level discussion in the Oval Office before television cameras instead of calmly and rationally -- and privately -- working out a deal over the hotly contested s
40 views0 comments
Bob Gatty

Sen. Tom Cotton, the right-wing GOP Senator from Arkansas, has sent letters to constituents who disagree with him on issues important to them, warning that they must stop writing or calling Cotton's office or the U.S. Capitol Police will be notified. Great way to treat your constituents, even if they do disagree with you. When I worked on Capitol Hill for the late U.S. Rep Edwin B. Forsythe (R-NJ) and Rep. James J. Florio (D-NJ), this is NOT how we responded to disagreeing an
16 views0 comments
{"items":["5d1a4a2df4db140016fbf579","5d1a4a2d60504500163660ec","5d1a4a2d6c5b26001600088e","5d1a4a2d06467e00161818fe","5d1a4a2ea5cfbc0015f71fb8","5d1a4a2f7ee3da00160ad6ac","5d1a4a386c5b2600160008b2"],"styles":{"galleryType":"Columns","groupSize":1,"showArrows":true,"cubeImages":true,"cubeType":"fill","cubeRatio":1.3333333333333333,"isVertical":true,"gallerySize":30,"collageAmount":0,"collageDensity":0,"groupTypes":"1","oneRow":false,"imageMargin":32,"galleryMargin":0,"scatter":0,"rotatingScatter":"","chooseBestGroup":true,"smartCrop":false,"hasThumbnails":false,"enableScroll":true,"isGrid":true,"isSlider":false,"isColumns":false,"isSlideshow":false,"cropOnlyFill":false,"fixedColumns":1,"enableInfiniteScroll":true,"isRTL":false,"minItemSize":50,"rotatingGroupTypes":"","rotatingCropRatios":"","columnWidths":"","gallerySliderImageRatio":1.7777777777777777,"numberOfImagesPerRow":1,"numberOfImagesPerCol":1,"groupsPerStrip":0,"borderRadius":0,"boxShadow":0,"gridStyle":1,"mobilePanorama":false,"placeGroupsLtr":true,"viewMode":"preview","thumbnailSpacings":4,"galleryThumbnailsAlignment":"bottom","isMasonry":false,"isAutoSlideshow":false,"slideshowLoop":false,"autoSlideshowInterval":4,"bottomInfoHeight":0,"titlePlacement":"SHOW_ON_THE_RIGHT","galleryTextAlign":"center","scrollSnap":false,"itemClick":"nothing","fullscreen":true,"videoPlay":"hover","scrollAnimation":"NO_EFFECT","slideAnimation":"SCROLL","scrollDirection":0,"scrollDuration":400,"overlayAnimation":"FADE_IN","arrowsPosition":0,"arrowsSize":23,"watermarkOpacity":40,"watermarkSize":40,"useWatermark":true,"watermarkDock":{"top":"auto","left":"auto","right":0,"bottom":0,"transform":"translate3d(0,0,0)"},"loadMoreAmount":"all","defaultShowInfoExpand":1,"allowLinkExpand":true,"expandInfoPosition":0,"allowFullscreenExpand":true,"fullscreenLoop":false,"galleryAlignExpand":"left","addToCartBorderWidth":1,"addToCartButtonText":"","slideshowInfoSize":200,"playButtonForAutoSlideShow":false,"allowSlideshowCounter":false,"hoveringBehaviour":"NEVER_SHOW","thumbnailSize":120,"magicLayoutSeed":1,"imageHoverAnimation":"NO_EFFECT","imagePlacementAnimation":"NO_EFFECT","calculateTextBoxWidthMode":"PERCENT","textBoxHeight":0,"textBoxWidth":200,"textBoxWidthPercent":50,"textImageSpace":10,"textBoxBorderRadius":0,"textBoxBorderWidth":0,"loadMoreButtonText":"","loadMoreButtonBorderWidth":1,"loadMoreButtonBorderRadius":0,"imageInfoType":"ATTACHED_BACKGROUND","itemBorderWidth":1,"itemBorderRadius":0,"itemEnableShadow":false,"itemShadowBlur":20,"itemShadowDirection":135,"itemShadowSize":10,"imageLoadingMode":"BLUR","expandAnimation":"NO_EFFECT","imageQuality":90,"usmToggle":false,"usm_a":0,"usm_r":0,"usm_t":0,"videoSound":false,"videoSpeed":"1","videoLoop":true,"jsonStyleParams":"","gallerySizeType":"px","gallerySizePx":940,"allowTitle":true,"allowContextMenu":true,"textsHorizontalPadding":-30,"itemBorderColor":{"themeName":"color_12","value":"rgba(226,223,223,1)"},"showVideoPlayButton":true,"galleryLayout":2,"targetItemSize":940,"selectedLayout":"2|bottom|1|fill|true|0|true","layoutsVersion":2,"selectedLayoutV2":2,"isSlideshowFont":false,"externalInfoHeight":0,"externalInfoWidth":0.5},"container":{"width":940,"galleryWidth":972,"galleryHeight":0,"scrollBase":0,"height":null}}